We created a test, "The Great Social Customer Service Race," and sent 280 tweets from 4 personal accounts, over a 4-week period. Here are the results.

Social media has always been about engagement. It's a place where conversations, networking and relationship building flourish. Unfortunately for business, this is difficult to scale. So many succumb to using the platform strictly for racking up fans and blasting promotions.

But times have changed. Customers now expect businesses to respond when they send messages, tweets or wall posts. It's up to each business to take advantage of new technologies that help prioritize, route and address these messages efficiently.

Recently, I conducted an experiment to assess whether 14 of the nation's top brands employ such technologies to achieve social media responsiveness. The test – dubbed The Great Social Customer Service Race – involved sending 280 tweets from four personal accounts, during a four-week period.

We analyzed the percent of total tweets each brand responded to, as well as the time it took them to write back when they did respond. We designed questions that tested specific listening technology features, as well as social response best practices.

Here's a few lessons we learned from the race that you can use to improve your own social media response.

Listening Technology Should Catch @, no @ and #BrandName

One of the most striking results was the overwhelming lack of response for tweets that did not include the @ symbol and the company's Twitter handle.

Even though the customer might not be specifically addressing the brand if they don't use their handle, these messages sometimes present a chance to surprise and delight the customer. Think of it this way: you either capitalize on an opportunity to create a brand advocate, or you risk a negative message traveling further, faster in the wrong hands.

This left a bad impression on me and my followers. Not only that, but competitors could be listening for your brand and capitalize on negative messages about you. Consider this response to a tweet I sent about Bank of America.

Prioritization is Your Best Friend

For large companies, it's impossible to expect that they respond to everything. But overall, these brands only replied to about 14 percent of the messages we sent. This is frighteningly low. To tackle this challenge, companies should utilize technology that identifies the most important messages and moves them to the front of the response queue.

This is done primarily through prioritization rules that can be customized and programmed into your listening technology. This should include priority triggers such as “thank you,” “angry,” “mad,” “switching,” “buying” and so on. Your team should also spend time finding other keywords that might be more specific to your industry or company.

McDonalds demonstrated during the race that its team was listening for thank you. This tweet received a response in just 13 minutes: 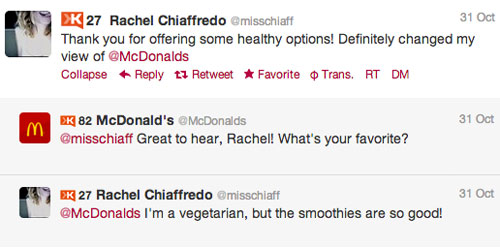 While these important interactions went unnoticed:

It's critical your team have a process for tracking responses once they are prioritized and routed. At one point during the race, we received two responses to the same tweet, one day apart. The first response seemed robotic, and the second didn't address the question. 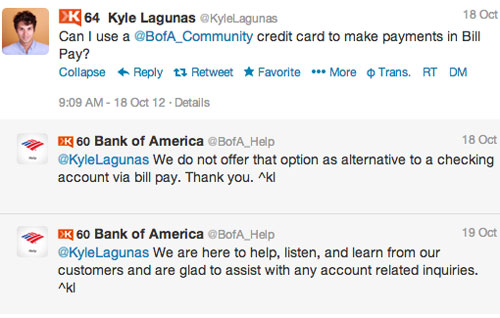 A customer service ticketing-type application is one way to achieve this kind of tracking. When a message is received, it becomes a response ticket that is instantly prioritized and routed. Then once it receives a response, it's removed from the response queue. This is also helpful if the responder that receives the message is busy. Many social listening technologies can instantly re-route the message if it isn't touched after a certain amount of time.

A customer's social activity level or purchase history might be another measure to consider when prioritizing your response. During the race, each of our four Twitter users tweeted the same brand as many as seven times during the four-week experiment. One goals was to see if any of the brands would identify us as active socializers and improve their response time. Not one of the 14 brands did.

To do this, ensure your software records every Twitter interaction with your brand in the corresponding customer's profile. This allows the next responding agent to quickly see if that customer is a brand advocate or tweeted negatively in the past. Also, program socially integrated ticketing software to increase response priority if a user emerges as an active socializer.

Are You Really Listening?

Customers social media response expectations will only continue to increase. Now is the time to get a handle on your engagement process with the right technology, used in the right way.

Is Pay-Per-Click (PPC) The Best Use Of Your Marketing Budget?

Nielsen found only 40% of survey respondents trust search result ads. Is pay-per-click (PPC) the best use of your marketing budget? We'll help you...

4 Ways to Plan for the B2B Social Commerce Revolution

We've compiled the 4 steps to get your B2B social commerce strategy off the ground and bring your marketing strategy into the 21st century. Check...

4 Social Media Myths That Are Holding You Back

Don't be fooled by so-called "social media experts." Here are four of the most common social media myths we've heard perpetuated through the aether.